Moving Up By Moving Out

In my last post I wrote about the impact that Michael Gerber’s book, The E Myth, had on me personally, and on our business. The lessons I learned from it encouraged me to step out of my comfort zone and represent our business to the community and our industry. It paid off, and Creative Source has experienced more than two years of sustained growth.

One of the ways we accomplished that was to expect the unexpected. Just as the U.S. economy began to slide into a recession, our company was running out of space. The building where we had been located for more than a decade was too small. We needed something bigger.

Conventional wisdom said to stay put. The economy was bleak. It was no time to move. But we knew we had to, if we were going to grow.

We came across a former retail space in a small shopping plaza in the Belden Village district. At first, we thought what anyone would—who in their right mind would put an office and production facility right in the middle of a retail center?

The more we thought about it, however, the more we realized what a great idea it was. The location offered ample space for offices and a production facility. In the area most people would think of as a storefront, we envisioned a meeting place—a think tank and brainstorming area that could accommodate small, one-on-one meetings or large group conferences.

We leased the space, and today that vision is a reality. The first thing you see when you enter Creative Source isn’t a lobby; it’s a room we call the Idea Center. It has dividers, and tables, and chairs. There’s a video monitor and a white board, along with a place to make coffee or put out food.

It’s free to community organizations that need a place to meet. Professional groups have used it for seminars. We also take our clients there for conversations or to brainstorm.

The Idea Center has been a tremendous success for us. Yes, we’ve gained business because of it. More important, however, is that we’ve helped people, and made friends. 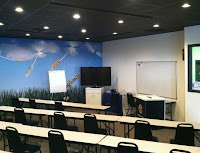 It’s also enabled us to give something back to the community. In recent years we’ve assisted several causes and organizations with service projects, and we’ve become active with local organizations like the chamber of commerce, Rotary club, and Toastmasters.

The point is, sometimes you can’t really stand out unless you know what’s out there to begin with. We had a need for more space. So did plenty of organizations in the community. By looking at things a little differently, we helped others even while we helped ourselves. By focusing our attention outside of the business, we improved things on the inside.

Remember the Billy Joel song, “Movin’ Out?” A few years ago we were doing just what the lyrics said—eking out a living and paying Uncle Sam with the overtime. We decided that if that was “moving up,” then we were moving out. So we did. And it’s made all the difference.

Stop by sometime for a cup of coffee, and maybe a dose of inspiration. See for yourself how the Idea Center has changed our business.

More important, ask yourself the question: What big idea could transform yours?

MIKE BOYD is president of Creative Source,
a marketing solutions company in Canton, Ohio. Click here to visit them online.

Get Out of Your Comfort Zone

Creative Source had been in business for more than a decade. We had established ourselves and our reputation for quality work—or so we thought.

Along came 2008. An economic downturn swept the country, and we weren’t immune. During that time, and well into 2009, we lost 70 percent of our largest client’s business. They weren’t unhappy with us; they simply decided to save money, too, and do the work in-house.

It was the worst thing that could have happened to us—and also the best thing.

We learned that we had to develop a new operating model. We had to diversify. And we could no longer depend only on referrals and word of mouth to generate new business. We had to go out and sell ourselves.

None of us had ever really done that. We weren’t comfortable with it. But it had to be done, and, as president of the company, the responsibility fell on my shoulders. 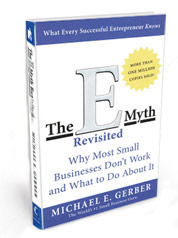 That’s when I read Gerber’s classic, “The E Myth,” in which he stresses the need to work on your business instead of in it. In other words, as an entrepreneur, you have to develop systems that will run your business so that you don’t have to.

Essentially, Gerber says that if you’re in the middle of everything, doing the work—if you’re actually in it up to your elbows, shirt sleeves rolled up, consumed with day-to-day tasks—then you’re not truly an entrepreneur. You have to develop systems designed to get you out of that mindset, and into one of being an owner.

I also met Dean Langfitt, who became a close friend and business associate. Dean is with The Ruby Group in Akron, which is affiliated with Sandler Training. They’re a global management and sales training organization, and learning their innovative approach completely changed the way I fulfill my role as president of Creative Source.

Not surprisingly, things changed for the better. Fifty percent of our current client base came on board in 2011 and 2012, and we’re poised for more growth in 2013.

The evolution of Creative Source over the past few years directly corresponds to what I’ve learned about owning and managing a business. I’ve learned to think like an entrepreneur, and not like an employee. Every business needs leadership to survive. I had to get out of my comfort zone if we were to make it. As a result, today we’re poised for growth and are busier than we’ve ever been.

There are keys to standout performance. But they don’t just happen. You have to keep learning, keep moving forward, and keep adjusting to the demands of the marketplace.

What’s holding you back? I encourage you to get out of your comfort zone and do the things that are truly necessary to reach your goals, both personally and professionally.

MIKE BOYD is president of Creative Source,
a marketing solutions company in Canton, Ohio. Click here to visit them online.

A Tale of Two Mikes

I started my career in the graphics industry working at a small print shop in Canton, Ohio called Edwards Printing. I was a jack of all trades, doing everything from working in the bindery to making deliveries to customers. But I worked hard and constantly looked for opportunities to learn and make myself more valuable. Eventually one of our largest customers noticed, and offered me a job. That customer was Camelot Music. 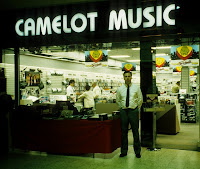 Camelot was one of the biggest names in the music retailing business. I went to work in their creative department and thought I had it made. We had stores across the country, and business was booming. The biggest names in the music business came to our offices. I met Phil Collins, George Michael, Cyndi Lauper, The Judds, Clint Black, Celine Dion and countless other artists.

It was pretty cool. I was content in my little niche, and thought I’d be there forever, or at least for a long, long time. Of course, this was before the Internet. People still went to stores to buy music instead of sharing it online. We saw the cassette replace the 8-track, the CD replace vinyl albums, and DVDs replace VHS tapes. Gradually, chains like Camelot began losing business to the Walmarts, Borders and Best Buys of the world, who began to aggressively sell music and videos at a discount.

The ride came to an abrupt end for us in the mid-1990s. Camelot filed for bankruptcy, and was eventually sold. Many of us found ourselves on the outside looking in.

The story turns out okay—Dave Hess and I took our experience at Camelot and started Creative Source, which we operate to this day.

But as I look back, I realize there were two different Mikes in that story. One took a little job at a small mom-and-pop business and turned it into something much bigger and better. The other took something big, and was happy to just keep things the way they were.

One stood out. The other one blended in.

That’s why I talk so much about standing out, in business and in life. When I think about the big-name artists, agents, marketing executives and music promoters I rubbed shoulders with at Camelot, I just shake my head. Who knows what opportunities might have been out there for me, if I had done just a few things here and there that would have made me stand out?

Instead, I was comfortable with the status quo.

It’s a lesson I try not to forget. At Creative Source, we strive to stand out from the competition in everything we do. And we counsel our clients to do the same.

How about you? Are you letting opportunities pass you by? Or are you paying attention to detail and doing the little things that will get you noticed?

It’s all about standout performance. And it can mean the difference between success or failure, in business and in life.

MIKE BOYD is president of Creative Source,
a marketing solutions company in Canton, Ohio. Click here to visit them online.
Posted by Mike Boyd at 3:57 AM No comments: