Don’t Be Just Another Orange Barrel

It’s that time of year again, when the orange barrels are back out in full force on Ohio’s roads. Once winter subsides, road construction is the norm across the state.

In fact, we become so accustomed to it that we hardly notice they’re there. Depending on where we live and work, we pass by hundreds, sometimes thousands, on a daily basis. They’re little more than an orange blur.

So we take them for granted. They’re unremarkable. No single barrel stands out. 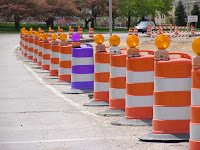 And that got me to thinking: It’s no different with your business. If you don’t do something to stand out, you’ll be lost in the marketplace—just like those orange barrels get lost along the highway.

It’s a noisy world out there, and a competitive one. What are you doing to stand out?

MIKE BOYD is president of Creative Source,
a marketing solutions company in Canton, Ohio. Click here to visit them online.
Posted by Mike Boyd at 12:39 PM No comments:

Stand Up, Speak Up, and Stand Out

If you’ve ever wondered that, you’re not alone. So did I, at one time. But before your mind wanders off to an image of a cook buttering toast at the local diner, let me explain.

Toastmasters International has been around since 1924. It’s a non-profit organization that operates clubs worldwide that are designed to help members improve their public speaking and leadership skills.

It’s that last part – “improve their public speaking and leadership skills” – that drew me to a local Toastmasters chapter a few years ago.

That required changing our message, and communicating it to our target market. In addition to joining Toastmasters, I participated in sales training sessions and began networking anywhere and with everyone I could.

Here’s the kicker: At the time, I thought I was doing all of that for me. And, to some extent, I was. Over time, however, I realized that the training I was going through was also putting me in a position help others.

Ultimately, that’s the most important part. Because it’s when we help others, and mentor others, that we truly stand out.

That really hit home for me when my daughter went off to college at Ohio State. She’s graduated now, but back then—due in large part to the new perspective I was gaining—I was able to describe college to her from a different viewpoint.

“This is the biggest networking event of your life,” I told her. “Every day you’ll be in the middle of 50,000 students, plus countless professionals who can help you get the most out of your college experience. Make the most of it.”

Instead of just thinking of college as a place where she could take some classes and party with friends, she followed my advice and built relationships throughout her four years there. Now, she works in communications for the university and is applying to graduate school.

We can have the same effect on everyone we come in contact with. Call it giving back. Or paying it forward. Whatever terminology we want to use, the key is sharing our knowledge and experience to benefit others.

That’s the kind of thing I’ve learned through organizations like Toastmasters. Stand up. Speak up. Turn your focus outward instead of inward. Not only will you be better for it, but the benefit you provide to others will make you truly stand out in the marketplace.

MIKE BOYD is president of Creative Source,
a marketing solutions company in Canton, Ohio. Click here to visit them online.
Posted by Mike Boyd at 8:38 AM No comments: